Home > Recent Updates > Ignite > Identity: I Am Your Father

I don’t believe I’ve ever seen a single Star Wars film from beginning to end. That’s a record I’m happy to maintain. But some parts of the films are so well known that references to them have entered popular culture. At the end of ‘The Empire Strikes Back‘ at the conclusion of a battle between Luke Skywalker & Darth Vader, [#spoileralert] Vader reveals that he is Luke’s father. That information is clearly an unwelcome surprise to Skywalker as, rather than face the new situation and all that may follow, he throws himself off the ledge he’s crawling along to his ‘certain’ death. Whatever you think of the Star Wars universe & the films which it has spawned, it is an iconic moment in an iconic series.

Luke had long believed that his father was dead, and that he’d been killed by Darth Vader, a face which had caused Skywalker to hate Darth Vader. No doubt this made the news all the more unbearable. Everything he thought he knew had changed. Even the person he thought he was had changed. In a few seconds his understanding of his world/universe/life had fallen apart.

So if I’m not fan of Star Wars, what’s caused me to write about it? Yesterday a news story broke which brought Star Wars to mind. The news story was completely unexpected, and some wondered if it was important enough to even call it ‘news’. But it has parallels to the above scene in Star Wars. 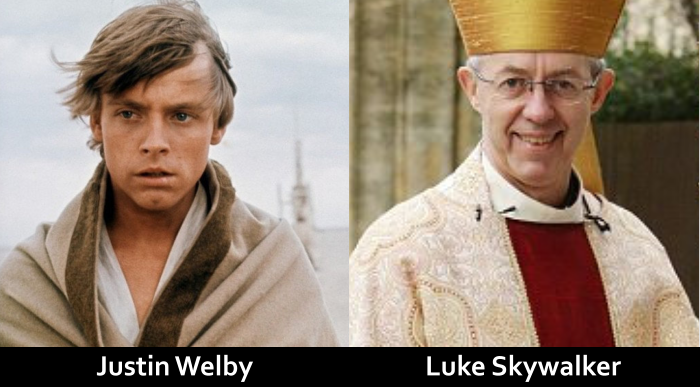 On Friday the Archbishop of Canterbury, Justin Welby, released a statement announcing that DNA tests had revealed that the man he’d grown up with as his father was not actually his biological father. It came as a big shock to the Archbishop, and an equally big shock to his mother. They both thought his father was a Whiskey Salesman called Gavin Welby, but his Father was actually Sir Anthony Montague Browne, former private secretary to Sir Winston Churchill.

Although the story is intriguing, for me, the most striking thing about it is what Welby says about the situation:

“Although there are elements of sadness, and even tragedy[…], this is a story of redemption and hope from a place of tumultuous difficulty and near despair in several lives. It is a testimony to the grace and power of Christ to liberate and redeem us, grace and power which is offered to every human being.”

When Luke Skywalker received the news that Darth Vader was his father, it changed everything for him. He couldn’t face it and so leapt to his ‘certain’ destruction. How refreshing then to hear what the Archbiship  says about the affect this news has had on his understanding of who he is:

“I know that I find who I am in Jesus Christ, not in genetics, and my identity in him never changes. […] What has changed? Nothing!”