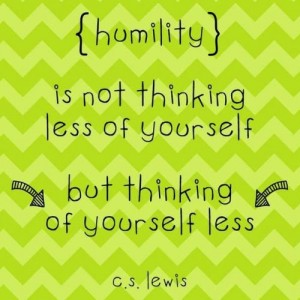 Do you know anyone who just likes to talk about themselves? It doesn’t matter how hard you try to change the conversation, or speak about something you think is completely unrelated; they have ninja-like skills when it comes to making your choice of topic somehow relate to them. And before you know it *bang* they’re talking about themselves again.

Do you know anyone like that? If you can’t think of anyone, it’s probably you! [yeah, I bet you’re thinking ‘yay, finally it’s about me’ ;o) ] Sadly I know too many people like that – and they’re really hard work. A conversation with them isn’t enjoyable on any level. It’s not just because when they’re talking about themselves I’m not getting any attention or time, but it’s because of what is unspoken – their attitude. There’s an attitude underneath all the talk which says ‘I don’t really care about you – not enough to hear what you might have to say’.

When Jesus met people & engaged in conversation He didn’t spend an hour telling them all about how brilliant He was, the incredible miracles He’d been performing, how far He’d walked, or what an incredible plan He had which was going to save mankind (that really would be something to talk about!). Instead He had proper conversations – two-way communication – talking & listening, listening and talking. He spent time with people and took an interest in them.

‘In whatever you do, don’t let selfishness or pride be your guide. Be humble, and honour others more than yourselves. Don’t be interested only in your own life, but care about the lives of others too.’ – Philippians 2:3-4 – ERV

Jesus cared about people. What they were going through & how they were feeling. It’s not that He didn’t have anything to say – but that He listened closely before responding to what they’d said. He engaged in ‘deep listening’ – hearing what they were saying, but listening out for the things they weren’t saying. Paying attention to other communication – tone, body language, etc.

There’s a cheesy quote that points out we have two ears and only one mouth so we should listen twice as much as we speak. Perhaps there’s some truth in that and we need to listen twice: to what is being said, but also to what is not being said. That will powerfully demonstrate that we care about the person we’re in conversation with.

Reflect:
– am I that person? (who always turns the conversation back around to me, no matter what) [you might need to be brave and ask those close to you]
– can I honestly say I really listen to people

Pray:
Father God, help me to care more about the people in my life & less about me;
Jesus Christ, help me to demonstrate how much I care about them by really listening to them;
Holy Spirit, inspire me to engage with what they’re not saying, as much as what they are saying.