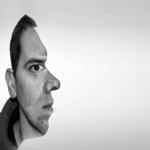 We’re starting a new series on the theme of identity. Our identity, and our understanding of it, is fundamental to who we are. I’m grateful to my friend, Nick Francis, for allowing us to use his awesome photo for this series.

Nick is a pretty ordinary guy: husband, dad, youth worker, etc. But this photo of him is messed up because it’s seen from two different perspectives.

We see ourselves from one perspective; others will see us from a different perspective. Our brain can play tricks on us & mess up our idea of who we are (however confident we might be). No matter how much we try to hold on to & focus on the correct perspective, it’s always possible for us to be distracted or diverted. Take a look at this video which makes the point:

Other people’s perspective of us can be distorted, and can distort our own perspective (we can start to believe what others say about us). The best perspective to pay attention to is God’s perspective, as it is the most perfect & complete. 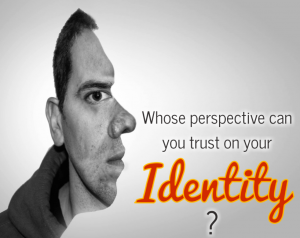 24 God said, “I command the earth to give life to all kinds of tame animals, wild animals, and reptiles.” And that’s what happened. 25 God made every one of them. Then he looked at what he had done, and it was good. 26 God said, “Now we will make humans, and they will be like us. We will let them rule the fish, the birds, and all other living creatures.” 27 So God created humans to be like himself; he made men and women. 28 God gave them his blessing and said: Have a lot of children! Fill the earth with people and bring it under your control. Rule over the fish in the ocean, the birds in the sky, and every animal on the earth. 29 I have provided all kinds of fruit and grain for you to eat. 30 And I have given the green plants as food for everything else that breathes. These will be food for animals, both wild and tame, and for birds. 31 God looked at what he had done. All of it was very good! Evening came and then morning—that was the sixth day. [Genesis 1:24-31 – CEV]

A few things to notice from the passage:

As a human being, created by God, you are amazing:

Psalm 139 says that God created you and me. The Psalmist says ‘I praise you because I am fearfully and wonderfully made’. God looked at what He’d created and said it was ‘very good‘ (unlike everything else which was just good).

If you struggle to understand how amazing you are, how unique you are, how valuable & loved you are, take a look from God’s perspective.

Whatever others may say about you,
whatever you may think about yourself,
nothing you ever think, say or do
will ever change God’s opinion of you.
He alone has the perfect perspective:
He knows you inside & out,
and He loves you completely.