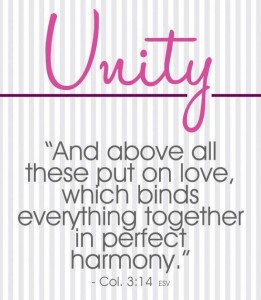 [continuing our exploration of Romans 12 – Rules for Christian Living]

Often when people think about the Church they think about what the Church stands against, because that often what it is most vocal about. Obviously different churches have different opinions, stand against different things, and campaign for different things. Wouldn’t it be great if people knew us by what we were passionately in favour of, rather than what we’re opposed to?

When Christians think about other churches we usually focus on the differences – we can list all the ways in which we believe slightly or wildly different things. But we do that at the expense of the huge areas of common belief. When we focus on what we have in common rather than what divides us, we can work together in incredibly powerful ways. Last October at Hope MK we saw 25 churches working together with a common purpose. Across those 25 churches there were huge differences of theology, practice, tradition and outlook – but because we focussed on our shared beliefs (Jesus Christ is Lord, He loves us & tells us to love others) we experienced unity like we’ve never seen before. One volunteer described how she was ‘almost moved to tears by the tangible sense of unity when we all came together to worship & pray’.

We nearly destroyed it at one point. We wanted to celebrate communion together – we felt it was an important thing to do as a gathering of Christians, the body of Christ in one place. But we very quickly realised that although the word ‘communion’ is about community and bringing people together in unity, actually it would have simply served to highlight the differences between us. So we decided against it. But it was a powerful lesson about the importance of focussing on what we have in common, rather than pointing out what can often be relatively minor differences.

‘Love each other in a way that makes you feel close like brothers and sisters. And give each other more honour than you give yourself.’ – Romans 12:10 ERV

This verse speaks about loving each other & unity among believers. There is enormous power in unity. A few days before Jesus was betrayed, arrested, denied, beaten, mocked, whipped & crucified (we’ll get to that next week) He prayed an incredible prayer for His followers (the Disciples & all believers), in which He prayed that ‘they would all be one[…] so that the world will believe that you sent me’. Wow! We have an amazing responsibility as Christians: to be one so that the world will believe that Jesus was who He said He was – the Son of God. So there’s no time for division & difference – it’s all about unity.

Well, that’s easier said than done. There have already been more splits in the Church through its history than you’ll find in a year’s subscription to OK magazine. It is estimated that there are approximately 40,000 different Christian denominations in the world. So we’re already incredibly divided. But we can still love each other – we can still work together by focussing on what we have in common.

When we are divided, the devil wins. This is as true within the body of one local church, as it is across a city and even across the worldwide church. So how do we love each other as described in verse 10 when there is so much difference? Paul describes the kind of love we should live out. Firstly, that it is ‘brotherly love’ [philadelphia] – love for brothers and sisters in Christ – we should have affection for our fellow believers. Secondly, that we should be ‘devoted to’ [philostorgos] them – the kind of love we find in strong, healthy families – that whatever the circumstances, we overcome them because of our mutual love & devotion. As Christians we are to demonstrate a different model of community. Not as the world understands community, but as God has created it. The bonds are so much deeper & stronger. Even in our differences (which are many).

Just like in families, we can’t cop out with the easy option of saying ‘I love you but I don’t have to like you’. Remember verse 9 said we must ‘love without hypocrisy’. However hard it may be, we are called to ‘love each other in a way that makes us feel close like brothers and sisters’ and to ‘honour one another’. Remember the Hope MK volunteer I mentioned earlier who talked about the tangible unity among the 25 churches last October. She also said ‘it felt almost like finding long lost brothers and sisters‘. I don’t believe there’s any coincidence that she chose those two phrases – they go hand in hand as we sincerely love each other.

Reflect:
– are there any fellow believers, or groups of believers I find it hard to love sincerely?
– does my behaviour make it hard for other believers to love me at times?
– what practical ways can I stand against division among Christians?

Prayer:
Father God, help me to always seek unity over division.
Help me to actively work towards it – to find common belief rather than difference.
Lord Jesus, may your prayer become our reality:
– that we would become one, in order that the world would believe in You
Holy Spirit, help us to uphold and fulfil our responsibility,
Never behaving in a way which causes people to question our faith. 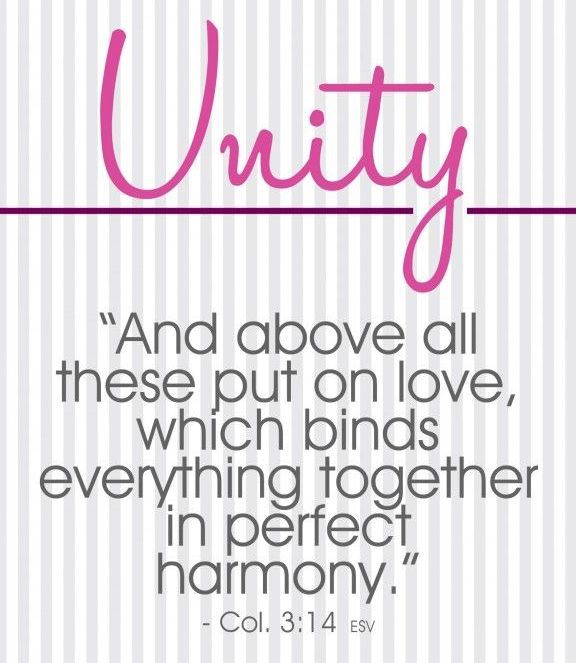