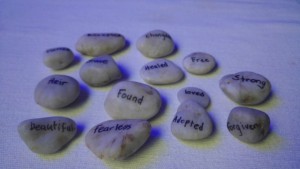 Continuing our ‘Identity‘ series, this week we were thinking about the fact that in the beginning God created, and then He named. Our names are a really important part of our identity – which you’ll know if you’ve ever been called by the wrong name, because there’s something within us which objects to that other name. Go and buy a coffee at Starbucks and you’ll know the feeling well…

We looked at the meaning of our names, which were a little vague & didn’t really mean much. Then we considered some of the negative names people call us or labels they use to describe us, and wrote them on our name labels.

In Genesis God creates and then He names:

3 God said, “I command light to shine!” And light started shining. 4 God looked at the light and saw that it was good. He separated light from darkness 5 and named the light “Day” and the darkness “Night.” Evening came and then morning—that was the first day. – Genesis 1 [CEV]

As we continue in Genesis we see that when a partner is made for Adam, he has an affectionate name for her: ‘This is now bone of my bones and flesh of my flesh;‘ (Gen 2:23). But after they’ve sinned, his attitude changes and he simply refers to her as ‘this woman’ (Gen 3:12). After God judges them, Adam renames her to ‘Eve’ (meaning ‘Mother of all’).

Throughout Scripture people are affected by encounters with God, and are often given a new name and/or identity:

This continues in the New Testament too:

Jewish names were usually given by God and were a sign of ownership, and only God would change people’s names. Names establish true identity – calling & purpose: Abram & Sarai are renamed to Abraham & Sarah (Father & Mother of many nations), Simon (who was far from stable) was renamed to ‘Peter: the rock’, Saul became Paul – from the greatest persecutor of believers to their greatest advocate. Their new name, assigned by God, was a sign of ownership, of being known & being understood – it didn’t change their past, but it presented them with a new future.

Jumping to the other end of the Bible we find a curious verse in Revelation:

To everyone who wins the victory, I will give some of the hidden food. I will also give each one a white stone with a new name written on it. No one will know that name except the one who is given the stone. – Revelation 2:17 [CEV]

‘I will give some of the hidden food‘ – I’ll provide what you need, like the manna which sustained the Israelites in the desert for so long

‘I will also give to each on a white stone with a new name written on it‘ – the new name is about being fully know, fully understood; not the destructive & harmful labels we considered earlier that we chose to believe (though they should have no power); this new name is about who we were created to be in Jesus

We took some time to stop and think through the labels we’ve had attached to us and the things we need to overcome, those things which are holding us back from being who God created us to be. Then we waited in silence…

God says He will give us a white stone, which was a sign of purity (white = clean), of innocence (presented to those acquitted during a trial) and of privilege (given to victors, a sign of status).

Then I invited everyone to take off their sticky label on which we’d written those negative labels at the start of the session, to rip it up and screw it up in a ball, then come up and discard it on the table, before taking a white stone from a bag. No-one was able to see the name on the stone, or select they one they liked – I had prayed, and we were trusting that God would give them the stone with the right name on for each of them. Then we spent some time reflecting on the new name and what it means for us, and praying that God would reveal the meaning to us & explain the name and the purpose/calling which comes with it. We offered ourselves in surrender to Him. 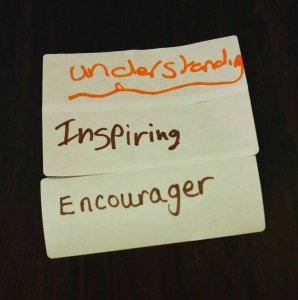 We concluded by taking three sticky labels each, selecting three people who were present, then writing down a positive word/name/comment about them and sticking it on their back.