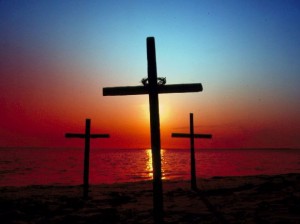 A couple of years ago on Maundy Thursday we gathered at the Church to watch The Passion of the Christ. It features an utterly brutal and devastating depiction of Jesus being beaten, whipped & crucified. It is literally gut-wrenching to watch. Some of us instead watched the BBC’s The Passion – a serialisation of the last week of Jesus life. That too contains the pre-crucifixion beating & whipping, and the devastating crucifixion. And there is nothing I can write or show here which will adequately demonstrate the horror of Jesus dying on the cross. There is nothing I can say to explain the gross injustice of the innocent Jesus dying on the cross. But the strange thing is that in God’s upside-down Kingdom, it was the act of a just God – an act of justice by a God of justice. I’ll try to explain why, starting with these verses:

‘Jesus our Lord, who was delivered up for our trespasses and raised for our justification.’ – Romans 2:45 ESV

Our God of justice cannot see sin go unpunished, but loves us too much to leave us in our sin & pay the price ourselves, and so He punishes His own Son in our place. By His wounds we are healed. By His stripes we are made well. He is beaten so we can be made whole. We are justified by the death of Jesus in our place. Justification doesn’t mean we’re innocent; it means we’re found guilty, but the punishment has been given to Jesus in order that we don’t have to face it ourselves. We’re guilty, but He pays the price, so that we are justified and made right in God’s eyes.

Jesus’ death makes it possible for us to be forgiven of our sin and made clean/whole/right before God. As He was dying on the cross Jesus prayed for those who were crucifying Him: ‘Father forgive them, for they don’t know what they are doing’. What a paradox. The very act of them crucifying Jesus is what makes possible the forgiveness for which Jesus prays. [note: Jesus chooses to ask His heavenly Father to forgive them even though they’ve not repented and resolved to change their ways]

One of the criminals on a cross next to Him chooses to mock Him and say that if He is the Son of God He should save Himself. The criminal on the other side defends Jesus – he recognises who He is, and sees that He’s innocent. He cries out to Jesus ‘remember me when you come into Your Kingdom’. Jesus responds by saying, ‘I tell you the truth: today you will be with me in paradise’. In the very last moments of this criminal’s life, he turns to Jesus. He has absolutely no chance to clean up his act, become acceptable or put anything right for himself, and yet he becomes the first person to inherit the glorious destiny of all who turn to Jesus as Lord. Beautiful. This gives the rest of us so much hope.

But of course, we live through Good Friday every year with ‘Easter eyes’. We know about the hope which is coming. The disciples didn’t have that privilege (despite the number of times Jesus told them that He’d be raised to life on the third day). It’s Friday, but Sunday’s coming:

Today there are two versions of the same song to end with. The first is a video of the band performing the song, with lyrics included. The second is the same version of the song, but the video is made up of crucifixion scenes from the The Passion of The Christ – you really don’t want to watch this version if you’re at all squeamish. The song is absolutely stunning – musically, lyrically and theologically. The lyrics are so beautiful & perfect for Good Friday.  [You can view the lyrics here.] 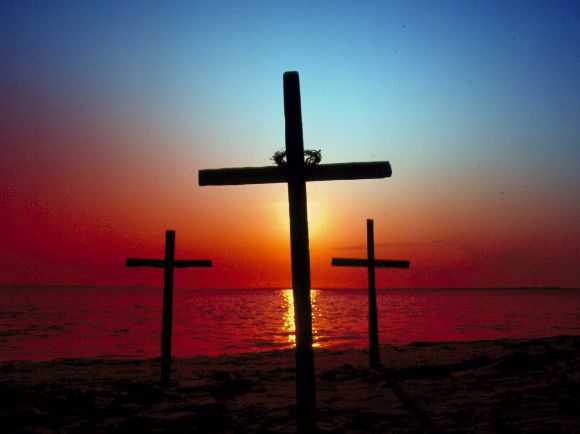