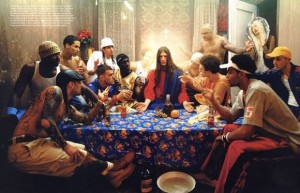 We’re approaching the climax of Holy Week and the story becomes more and more familiar. But please continue to take the time to read it, and to reflect on it. What do you notice for the first time when you read it? You are different now then when you heard it last year. What takes on new meaning for you now? I’ve used The Message version below to help tell the story in different language than you might be used to. I’ve added some reflections – but the story really tells itself:

After sunset, he and the Twelve were sitting around the table. During the meal, he said, “I have something hard but important to say to you: One of you is going to hand me over to the conspirators.”  They were stunned, and then began to ask, one after another, “It isn’t me, is it, Master?” Jesus answered, “The one who hands me over is someone I eat with daily, one who passes me food at the table. In one sense the Son of Man is entering into a way of treachery well-marked by the Scriptures—no surprises here. In another sense that man who turns him in, turns traitor to the Son of Man—better never to have been born than do this!” Then Judas, already turned traitor, said, “It isn’t me, is it, Rabbi?” Jesus said, “Don’t play games with me, Judas.” – Matthew 26:20-25 MSG

Jesus had shared this Passover meal with his disciples, his good friends. They’ve lived together, served together, walked for miles together, seen miraculous things together, for three years. For Jews this meal was hugely significant each year – but for Jesus this was to be His final meal with His friends. What an occasion. What must He have been feeling?

Then He reveals that one of them, one of His friends, will betray Him. He’s known all along (how could He not know?) but somehow it doesn’t take away the bitterness for Him. One of His closest friends who’d just shared this special meal and significant occasion together, was already working out how & when would be best to betray Him. That must’ve rubbed salt in the wound for Jesus. Like having a drink with your best mate down the pub immediately before going off and sleeping with his girlfriend. As if being betrayed isn’t bad enough – for the friend to pretend that all is well immediately before, somehow makes it worse. Judas is revealed as the betrayer – it was subtle, but Jesus & Judas knew.

During the meal, Jesus took and blessed the bread, broke it, and gave it to his disciples: Take, eat. This is my body. Taking the cup and thanking God, he gave it to them: Drink this, all of you. This is my blood, God’s new covenant poured out for many people for the forgiveness of sins. “I’ll not be drinking wine from this cup again until that new day when I’ll drink with you in the kingdom of my Father.” They sang a hymn and went directly to Mount Olives. – Matthew 26:26-30 MSG

Jesus took some of the elements of the Passover meal, something the disciples knew and understood well, and transformed them into something else. The symbolism of these elements stretches back hundreds of years. This meal and the event it remembered, always pointed toward the events of Holy week – even though the Jews didn’t understand it at the time. And now Jesus has taken the meal the disciples thought they knew, and given the symbols even deeper meaning – and they just don’t get it. What is He talking about: the bread is His body which is broken, and the wine is His blood which is poured out for many for the forgiveness of sins. It is not until the next day, when they see Jesus’ body broken on the cross and His blood pouring out as He dies, that they understand.

Then Jesus told them, “Before the night’s over, you’re going to fall to pieces because of what happens to me. There is a Scripture that says, I’ll strike the shepherd; helter-skelter the sheep will be scattered. But after I am raised up, I, your Shepherd, will go ahead of you, leading the way to Galilee.” Peter broke in, “Even if everyone else falls to pieces on account of you, I won’t.” “Don’t be so sure,” Jesus said. “This very night, before the rooster crows up the dawn, you will deny me three times.” Peter protested, “Even if I had to die with you, I would never deny you.” All the others said the same thing. Then Jesus went with them to a garden called Gethsemane and told his disciples, “Stay here while I go over there and pray.” Taking along Peter and the two sons of Zebedee, he plunged into an agonizing sorrow. Then he said, “This sorrow is crushing my life out. Stay here and keep vigil with me.” Going a little ahead, he fell on his face, praying, “My Father, if there is any way, get me out of this. But please, not what I want. You, what do you want?” – Matthew 26:31-39 MSG [emphasis added]

Reflect:
– have you ever denied that you ‘know Jesus’?
– how many times have you prayed ‘but not what I want, what do you want’? 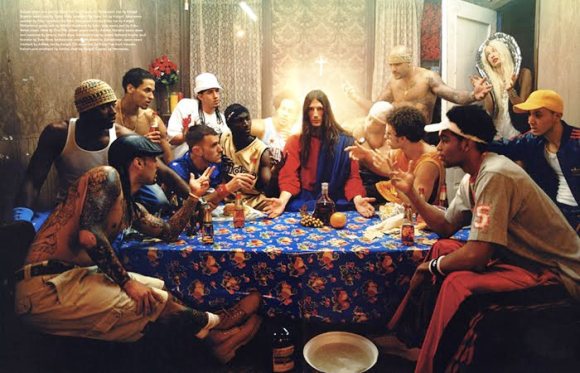