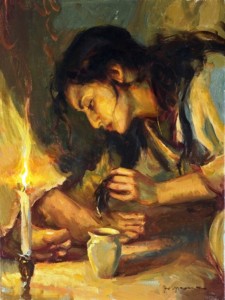 As we progress through Holy week and the story continues, we now find that the Jewish leaders have moved on from simply having Jesus arrested to having Him killed. Things have taken a turn for the worse. As the Pharisees said themselves, Jesus ‘teaches the way of God truthfully, and doesn’t care about anyone’s opinion’.

His actions have continued to stir up trouble for Him – but He knows what He must do. He’s always known it – and He’s explained it to His disciples on a number of occasions. Now He makes it absolutely clear to them what they can expect in the next couple of days:

When Jesus had finished teaching, he told his disciples, “You know that two days from now will be Passover. That is when the Son of Man will be handed over to his enemies and nailed to a cross.” At that time the chief priests and the nation’s leaders were meeting at the home of Caiaphas the high priest. They planned how they could sneak around and have Jesus arrested and put to death. But they said, “We must not do it during Passover, because the people will riot.” – Matthew 26:1-5 CEV

Here Matthew weaves together what may have been concurrent events: Jesus explaining to His disciples what will happen, and the Jewish leaders plotting to make it happen. But there’s still something missing. We don’t know the detail of their plot. Enter Judas:

Judas Iscariot was one of the twelve disciples. He went to the chief priests and asked, “How much will you give me if I help you arrest Jesus?” They paid Judas thirty silver coins, and from then on he started looking for a good chance to betray Jesus. – Matthew 26:14-16 CEV

Notice that it was Judas who sought out the priests and suggested that he may be able to help them. Quite how he knew about their plot is unclear. Maybe it was through ‘the word on the street’. Or perhaps he was an intelligent man and he worked it out based on what Jesus had said about His arrest. We don’t know. But we also don’t know what led him to make this decision. How did he turn from being one of Jesus’ closest friends, to this act of utter betrayal? But what we do know is that Judas requested payment in order to help the priests have Jesus arrested – and they agreed to pay him 30 pieces of silver.

Between the two short passages we’ve looked at above, there sits another. The first passage speaks about Jesus predicting His death and the priests plotting to make it happen. The second speaks about the deal which was done to bring it about. In the middle is a very revealing passage – Matthew 26:6-13 – about a woman who approached Jesus with a jar of very expensive perfume & she poured it on Jesus’ head. The disciples missed the point (as they so often did) and got angry; they argued that she could have sold the perfume and given the money to the poor. Jesus interrupts their complaints and says that what she’s done is incredibly important. He says ‘by pouring this perfume on me she has prepared my body for burial’. After His crucifixion, because of the approaching Sabbath, Jesus’ body was quickly taken down, wrapped in cloths and placed in a tomb. There was simply no time for it to be properly prepared. No matter – because this woman had already prepared His body. She had willingly and without any prompting, given up her investment in this expensive perfume, in order to bless & anoint Jesus’ body.

So tucked in between a passage where Jesus’ predicts His death, and a plot by the high priests to bring about His death, we find this beautiful instance of Jesus being prepared for what was to come. Even though He knew exactly what was going to happen, it was far from easy for Him. He needed time to prepare Himself spiritually & mentally (as we’ll see in the next couple of days) and this woman prepared Him physically – a beautiful, sacrificial act which would otherwise not have take place.

Reflect:
– what do you think caused Judas to turn against Jesus?
– how did the Chief Priests justify to God their plot to have Jesus killed?
– in the midst of everything else, consider just how blessed Jesus must’ve felt by the ‘beautiful thing’ the woman did
– what ‘beautiful thing’ might you be able to bless Jesus with this week? 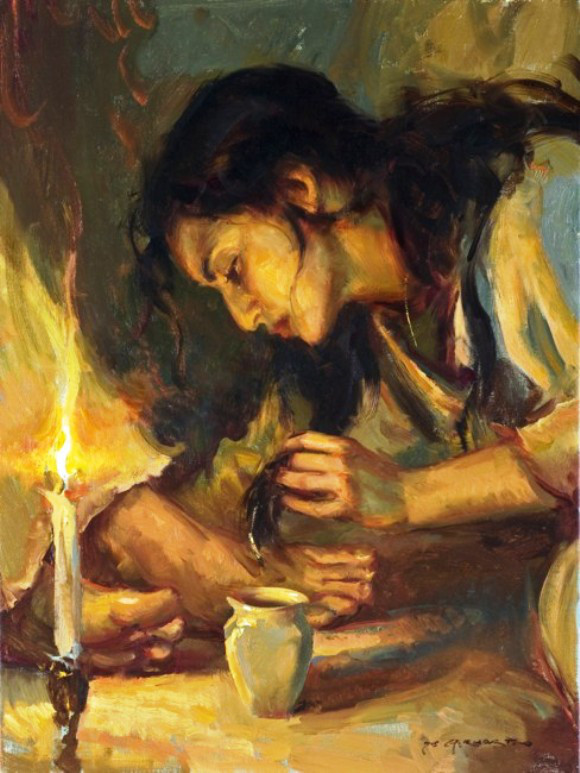