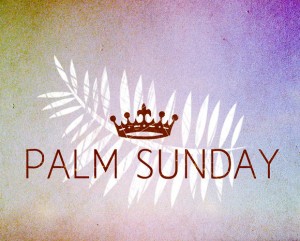 Note: Yes it’s Sunday, and we don’t normally have reflections on Sundays, but it’s Palm Sunday and marks the start of Holy Week. It is the most important week in the Christian calendar, and we’re going to use our final Lent reflections by following & exploring the events of that week; delving a little deeper than usual and discovering some of the symbolism which has been there for all to see but is often missed. We’ll be sticking to the Gospel of Matthew, with one little detour into Luke’s on Saturday.

When they neared Jerusalem, having arrived at Bethphage on Mount Olives, Jesus sent two disciples with these instructions: “Go over to the village across from you. You’ll find a donkey tethered there, her colt with her. Untie her and bring them to me. If anyone asks what you’re doing, say, ‘The Master needs them!’ He will send them with you.”
This is the full story of what was sketched earlier by the prophet:
Tell Zion’s daughter, “Look, your king’s on his way, poised and ready, mounted on a donkey, on a colt, foal of a pack animal.”
The disciples went and did exactly what Jesus told them to do. They led the donkey and colt out, laid some of their clothes on them, and Jesus mounted. Nearly all the people in the crowd threw their garments down on the road, giving him a royal welcome. Others cut branches from the trees and threw them down as a welcome mat. Crowds went ahead and crowds followed, all of them calling out, “Hosanna to David’s son!” “Blessed is he who comes in God’s name!” “Hosanna in highest heaven!”
As he made his entrance into Jerusalem, the whole city was shaken. Unnerved, people were asking, “What’s going on here? Who is this?” The parade crowd answered, “This is the prophet Jesus, the one from Nazareth in Galilee.”  – Matthew 21:1-11 MSG

For three years Jesus had been travelling around from town to town and village to village, preaching the Good News, and demonstrating God’s love for His people. He’d be doing some absolutely staggering miracles – but He’d been saying some things which were even more staggering. The result was that people wanted to see & hear Him, they wanted to be touched & healed by Him. By this point in His ministry, just about everywhere He went crowds of people would gather (thousands at a time). They wanted to hear what He had to say. But much of what He was saying went against the teaching of the Jewish leaders. He questioned them – sometimes publicly. At other times He rebuked them. They were losing their power and influence over the people. They felt threatened by Him and were incredibly angry. Everyone wanted to listen to Jesus, not to the Jewish leaders. And so they started plotting to solve the ‘problem of Jesus’ by doing away with Him – they were scheming to have Him killed. Jerusalem was preparing the the feast of the Passover (which we’ll cover more on Thursday) – anticipating the arrival of 500,000 to 2,000,000 Jews to celebrate the feast. When you have that many visitors in a city at one time, you can expect trouble. The Roman authorities were on edge – Pontius Pilate, the prefect of the province of Judea, was keen to keep order and prove to Caesar that he was up to the job he’d been given.

As crowds increased & people filled the streets, as the buzz in the city grew to fever-pitch, Jesus arrived. Word quickly spread through the crowds & excitement increased. Some of the people on the streets had heard Jesus preaching, others had been healed by Him, some had simply heard about Him and the miraculous signs & wonders He’d performed, and they couldn’t wait to see what He’d do next.

For hundreds of years the Jews had been awaiting the arrival of the Messiah who had been promised throughout the Old Testament. they were anticipating the arrival of a Saviour – a mighty warrior who would arrive in power and might, over-throwing the Roman occupiers and rule over the people. At Passover the Jews remembered the escape of their people from Egypt – a time when God set them free from oppression. So at Passover each year, anticipation was high that God would move again. Could this be the year? There had been some truly incredibly things going on. Was God on the move? Was Jesus part of that plan? He certainly seemed to have been suggesting that He was.

Jesus arrived in Jerusalem riding on a donkey which He’d instructed His disciples to collect from a nearby village. Matthew makes it clear that Jesus was intentional about the whole donkey thing, stating that ‘this took place to fulfil what was spoken by the prophet Zechariah’: ‘look, your king’s on his way, poised and ready, mounted on a donkey’. For those who had eyes to see it, Jesus was making it clear that something of absolute importance was taking place. He didn’t arrive in power on a stallion with chariots and armies, instead He arrived in humility, on a donkey with some pretty unreliable ex-fishermen & tax collectors.

But most of the crowd felt something. They seemed to know in their hearts that something amazing was happening. They lay down their cloaks on the road for the donkey to walk on, and cut down branches from trees and lay them down too. Don’t miss the symbolism here – this was an honour reserved for a king. Jesus was fulfilling the prophecy of Zechariah that the king would come to the people riding on a donkey, and the people in the crowd were submitting to Him as king. The branches of the palm trees were symbols of Jewish nationalism and victory. This was a triumphant entry into the city. A journey of significance & victory.

As Jesus moved through the city, the crowds moved with Him. Imagine the scene as thousands of people moved in front, alongside and behind Jesus, scared that they’d be missing out by simply letting Him pass. They were pushing and shoving, and they were calling out ‘hooray for the son of David’, ‘God bless the one who comes in the name of the Lord’, and ‘praise God in the highest heaven’. As good, devout Jews, they knew that the Messiah who had been promised long before would be born from the family line of King David. They recognised this was true of Jesus. They praised God for it & asked Him to bless Jesus.

Could it be that God was on the move, and that the long-promised Messiah had now been revealed? If the crowd was excited before – imagine the level of excitement now. Imagine how the word spread throughout Jerusalem. What a party there must have been that Sunday evening! There were going to be some sore heads on Monday morning…

Reflect:
– how do you think this celebration & excitement affected the Jewish leaders?
– do you think it helped to settle the nerves of the Roman prefect & his men?
– the Jews were excited about the arrival of a king & saviour to overthrow the Roman occupiers
– how did they explain the contrast between that and Jesus arriving on a donkey?

Pray:
Father God, may we not skip over the celebration of Palm Sunday.
Remind us that it really was something worth celebrating.
Lord Jesus, remind us that we have the honour & privilege of welcoming you every day.
Forgive us for the times when we fail to even acknowledge you.
Holy Spirit, open our eyes to see & understand the symbolism & meaning of Holy Week.
Make it come alive for us & affect us deeply.