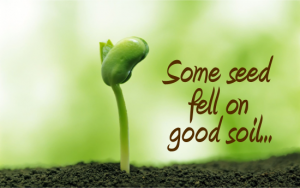 In Matthew 13 Jesus tells the story of a farmer sowing seeds. Some of the seeds that farmer sowed fell on the footpath and were eaten by birds. Other seeds fell in shallow soil & so they sprouted quickly but they wilted under the hot sun because they didn’t have deep roots. Some seed fell among thorn bushes and the young plants were choked by the thorns. But some seed fell on good soil and produced a great crop, up to 100 times what had been planted.

Asked by His disciples ‘why do you speak in parables?’ Jesus told them that He was revealing secrets of the Kingdom of God. The parables contained deep truths, if only people were open to discover/realise those truths.

Jesus told the story of the farmer sowing seeds to explain something about how our faith grows, but also to warn how easily it can be lost:

So which of the seeds best represents where you’re at with your faith?

I’ve seen too many people (of all ages) who’ve made a commitment to Jesus, then have neglected their faith, failing to nurture it, because they thought it would magically develop on its own. Just as a seed which is sown and sprouts has to be watered & fed, tended & cared for, the same is true of our faith. I’m not a gardener, but I will do whatever I can to help you nurture your faith & keep it growing & strong. The question is, will you?

But I will bless those who trust me.
They will be like trees growing beside a stream –
trees with roots that reach down to the water,
and with leaves that are always green.
They bear fruit every year and are never worried
by a lack of rain. – Jeremiah 17:7-8 CEV

Reflect:
– honestly, which picture used by Jesus really applies to my faith?
– if I’m struggling or actively want to deepen my faith, how can I go about it/who can I talk to?
– is my faith ‘producing a harvest’? Am I being fruitful?
– what do I need to ensure my faith remains strong?

Pray:
Father God help me to lay down deep roots,
In high winds or drought, may my faith remain strong. 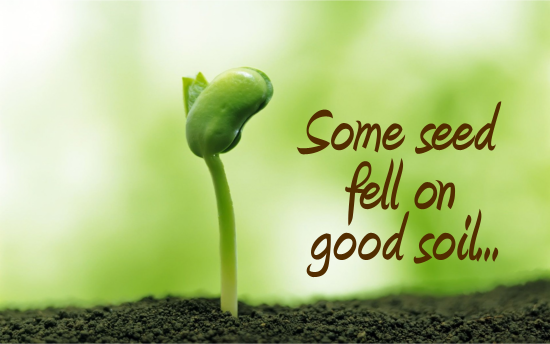