Home > Recent Updates > Ignite > Identity: Where Are You? 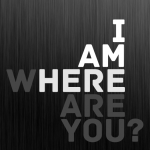 Continuing our ‘Identity‘ series, this week we looked at the first question asked in the Bible by God. We pick up the story at Genesis 3:7, after Adam & Eve have been tempted by the sneaky serpent and have disobeyed God:

7 Right away they saw what they had done, and they realized they were naked. Then they sewed fig leaves together to make something to cover themselves. 8 Late in the afternoon a breeze began to blow, and the man and woman heard the Lord God walking in the garden. They were frightened and hid behind some trees. 9 The Lord called out to the man and asked, “Where are you?” 10 The man answered, “I was naked, and when I heard you walking through the garden, I was frightened and hid!” 11 “How did you know you were naked?” God asked. “Did you eat any fruit from that tree in the middle of the garden?”

Adam’s answer to God’s question, ‘I was frightened because I’m naked so I hid’, drops them right in it. They’ve been busted and God calls them out immediately: ‘how did you know you were naked?’

Until the point they disobeyed God, they had no idea they were naked (Gen 2:25 – ‘though they were naked they were not ashamed’). They’ve sinned and they’re no longer comfortable in their own skin – it’s not how God created them to be – not His plan for them. They felt ashamed and sewed fig leaves together to cover themselves.

Adam & Eve sinned – they disobeyed God. Even though God knew exactly what they’d done, He went looking for them because He wanted to restore their relationship. We were created to be in relationship with God & when we try to hide, for whatever reason, He calls out to us ‘where are you?‘.

He didn’t create us to be either fearful of Him, or ashamed of ourselves. If you feel like that, you need to know that God has a better way for you.

God wasn’t satisfied when the coverings Adam & Eve had made from leaves, and so created clothes for them from animal skins (Genesis 3:21). He had a better way and so He made a new covering for them. He had compassion on them and wanted to deal with their shame.

He wants to deal with your shame too.

Pray & speak to God about those things you try to hide,
and start to let go of them, and let God take them from you.